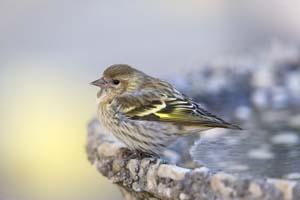 The Pine Siskin is the most common of the "winter finches" to be found at your feeders....but not every year. An "irruption" migration usually takes place every two or three years that can bring large numbers of Siskins to your backyard.

The Pine Siskin irruption migrations mainly occur when the seed crop has failed in the boreal forests. In some years large flocks may appear as far south as Florida. Some "irruptive" Siskins may stay near a dependable food source and nest far south of their normal breeding range.

Pine Siskins become considerably plumper through accumulation of fat with the onset of winter. Each bird can pack enough seeds into its expandable esophagus to support itself through five hours of rest at –20º C temperatures.

They have difficulty opening the large seeds of striped sunflower but enjoy black-oil sunflower seed, chips and Nyjer.

Identification can be tricky. A closer look at a group of goldfinches may surprise you with this little streaky bird amongst the group. Look for: a small finch with a small bill and notched tail. It has lots of streaks and a tinge of yellow in its wings and tail.